Reflections After Attending an MROP

Two days before I left for Ghost Ranch I had a dream that put me on notice that this experience was not going to be “business as usual.” In the dream I was going somewhere important and needed to borrow a car. I asked a friend—a kind of wild guy who lives in the mountains of Montana— if I could borrow his car and he said, “Sure.” I found the car out on the highway. When I opened the driver’s side door I was astonished to see the car had no steering wheel, brakes, or gas pedal. I got in and the car took me where I needed to go. I was both frightened and excited to know that I was headed on a trek on which I was not taking the lead.

The great news about this initiation experience is that this was not a self-directed tour of what I already knew. We were being led to the wilderness—both literally and figuratively. From the start, the leaders told us we were not going to be emotionally manipulated. Instead we were being invited into the mystery that is at the heart of our existence. Through the power of rituals, story, the harsh beauty of the landscape, and our own yearning for the Divine we entered into sacred time and space and energy. And though we stood shoulder to shoulder with our brothers, supporting one another with tender care and enormous respect, each man took a solitary journey where only he could go. The courage of my brothers was inspiring.

My own journey took me to despair. It was a despair I never knew I had, though when it was revealed (with the help of the rituals and a coyote I met on a pre-dawn hike) I was relieved by its unveiling. It’s been with me a long, long time. The truth was out. All my defenses had been scaled and behind the shattered walls was a cynical man whose every trick at self-redemption had failed, who now feared the worst—that he would spend the rest of his days poking around this failed and empty bag of tricks.

And in my emptiness, climbing a rocky trail in the pre-dawn shadows, I knew as I’ve never known before that I could never be a self-made saint, which has been my particular temptation, my particular folly. I arrived at the crest of Chimney Rock mesa and moved to the edge. I held my despair before me, weighing the heft of it. I turned to God and offered it. It was all I had left to give. My despair.

Just then, the sun pierced the sky above Kitchen Mesa to the east. Light flooded the valley and bushes were aflame. I prostrated myself before the sun—the earth cold on my bare chest and the sun warm on my shoulders. Everything seemed new. Into my mind came the poem, “In the beginning was the Word and the Word was with God and the Word was God.” And I had knew in a new way that the original Big Bang was an utterance of the Creator, a word cried out in joy and wildness, and I knew that I, too, was part of that spoken word. I am an utterance of the Creator. Along with all of creation I flow from the heart of the One who Bears Many Names in a profligate act of self-expression. My futile tricks no longer matter.

The birds sang around me then, and I shared my breakfast, a granola bar, with them. I joined their song with hymns of praise.  A day of deep mourning had ended. A new life had begun in me. I try to live it graciously, by keeping my hands off the steering wheel. 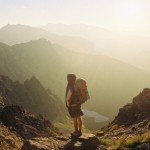 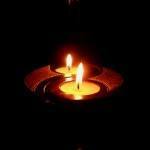